Fine wines generally have a low correlation with other assets. We zoom in to look at one fine wine example which may defy this observation.

In this blog, we wanted to share with you some interesting observations we’ve made when analyzing fine wine data and measuring their correlation to key financial indexes of the world. Since 2019 Q4, our team has seen the addition of an experienced Data Scientist. His involvement is instrumental towards our initiative to add a data-driven layer of understanding on the world of fine wines. It all goes back to our vision to enable wines as liquid pleasures and assets, and yes we know, one is not to exist without the other.

In our inaugural WWX Wine Data feature, we will look at Opus One and Dow Jones Industrial Average index.

Opus One, a leading winery in the heart of Napa Valley, California, USA

Wine as a Hedge – always true?

For those who have explored wine investment or wine as an asset topic before, you might have already come across a handful articles illustrating the negative correlation between fine wines and other commodities especially during times of turbulence. General observations show that when stock markets show volatile signs, wine prices tend to remain relatively stable. The strategy of hedging involves buying valuable assets that move in opposite direction against another key valuable asset in the portfolio. Given wines’ negative correlation against assets like gold, stocks, etc. it has generally been seen as one of the hedge options for those who seek to diversify into alternative assets.

Are there wines that perform differently?

That is, are there any wines whose performance track the stock market instead? Yes too! Let’s take a closer look at one specific wine – Opus One. We tracked global average price data of Opus One from vintage 2006 to 2016 and pitched it against Dow Jones Industrial Average Index. The two hits a correlation of r = 0.978 (Opus One 2011) for the past 4 years (January 2015 to December 2019), which is considered very highly correlated. Opus One 2006 to 2014 all demonstrates this high degree of correlation, whilst that of 2015 and 2016 have yet to display such patterns. With time, we believe that these two more recent vintages will likely conform with previous vintages’ strong correlation with Dow Jones Index performance. 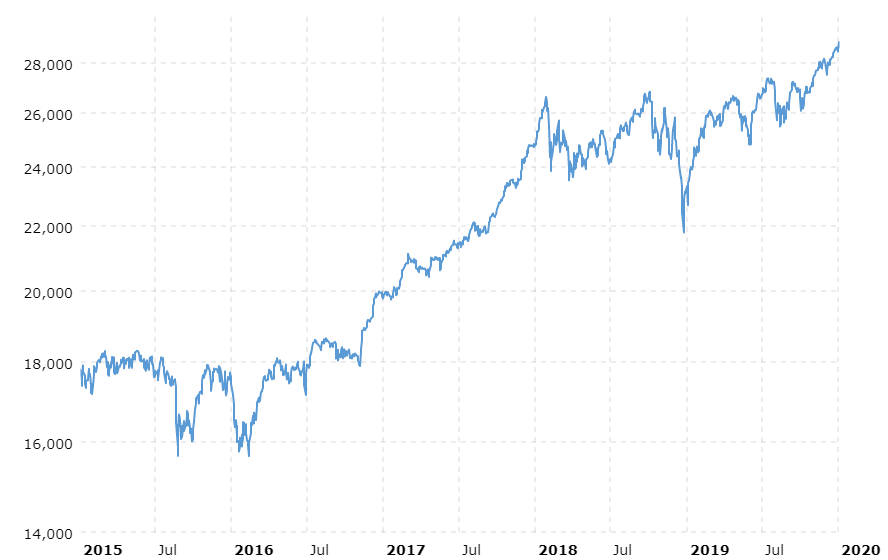 Dow Jones Industrial Average Index Movement (Jan 2015 to Dec 2019) If we would have superimposed the price movements of Opus One vintage 2006 to 2014, they would have largely followed the movement of DJIA

How about correlation with other indexes?

We also look into the correlation strength between Opus One and several other indexes such as Hang Seng Index, Shanghai Stock Exchange Index (SSEI), Nikkei, FTSE and DAX. Overall, European indexes both display weaker relationship with Opus One’s price performance. When it comes to Asian indexes, Hang Seng Index and Nikkei show stronger correlation, whilst that of SSEI is the only one displaying negative correlation. It’s worth noticing that DJIA and SSEI have been moving in opposite directions in general over the past 5 years. 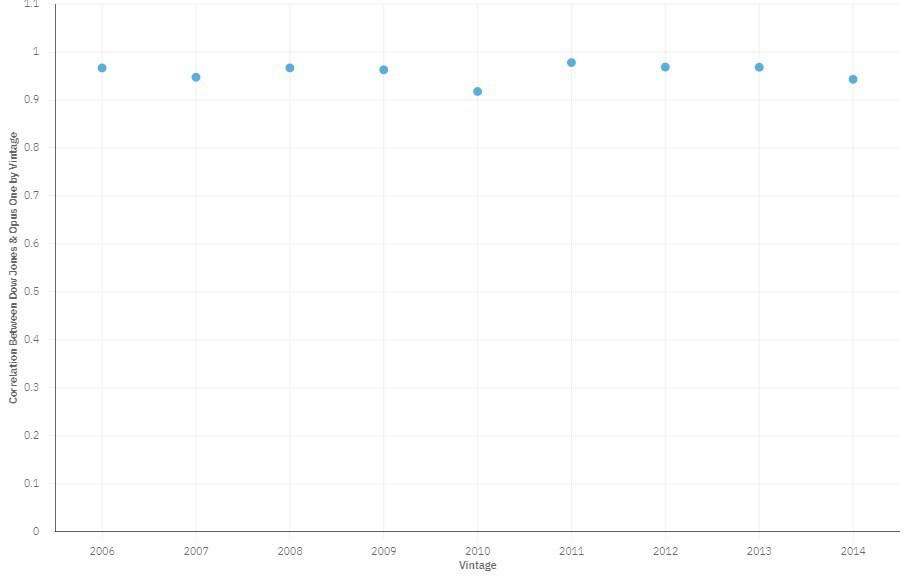 Opus One 2006 to 2014 and the correlation coefficient values with DJIA. A very strong correlation has been shown, with R-squared value averaging 0.957.

The above preliminary observations and analysis done on Opus One shows that it may be too much of a generalization to say that all wines are safe haven assets. Indeed investable wines have shown their ability to preserve value, at times offering rewarding growth, over the past 20 years. A deeper look into different geographic segments, and closer look into individual wine is necessary to truly grasp the performance pattern and asset quality.